A popular outdoor amphitheatre on a University of Wisconsin campus got a new lease on life when crumbling limestone seating tiers were replaced with VERSA-LOK seat walls and integrated stairs. 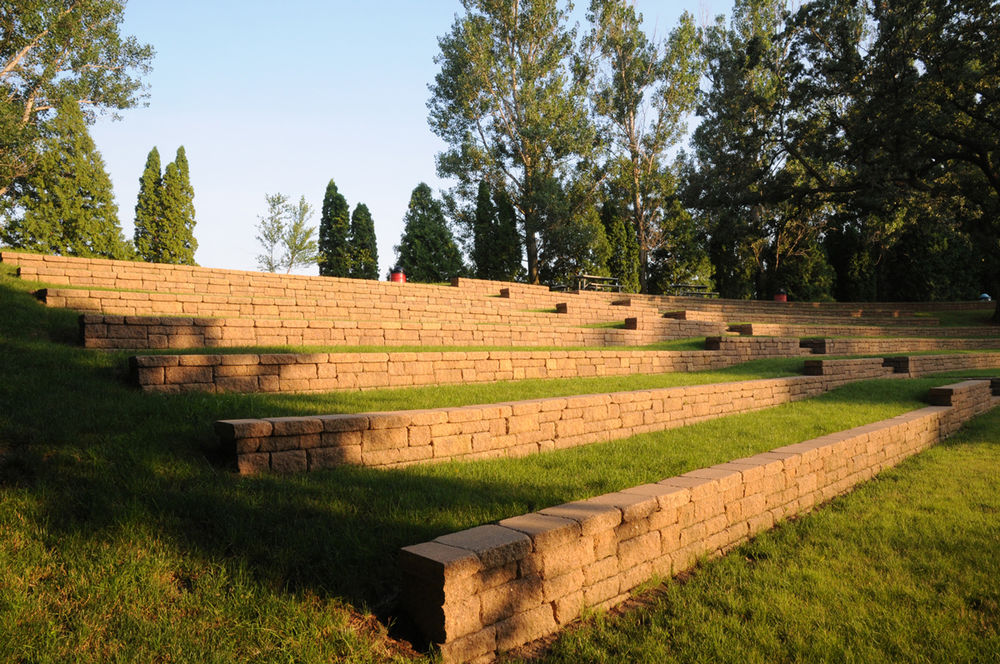 Nothing beats sitting outside on a beautiful summer’s eve listening to music or enjoying a play. That’s what Dr. Melvin Wall envisioned for the campus of University of Wisconsin-River Falls in the 1960s after he and his wife toured Northern Italy and fell in love with an amphitheatre built in the Greco-Roman style. Wall, chairman of the university’s Plant and Earth Science Department and head of the Campus Planning Committee, took the idea to the administration and garnered the support of the President.

Wall proposed that an outdoor amphitheatre be built on the south end of the campus near South Fork, or “Pete’s Creek.” He enlisted the help of students, the administration and alumni; a former student ponied up a $20,000 matching grant. Hundreds of students, faculty and friends of the university worked in mud to level the area and haul in large limestone blocks to create the seating tiers. 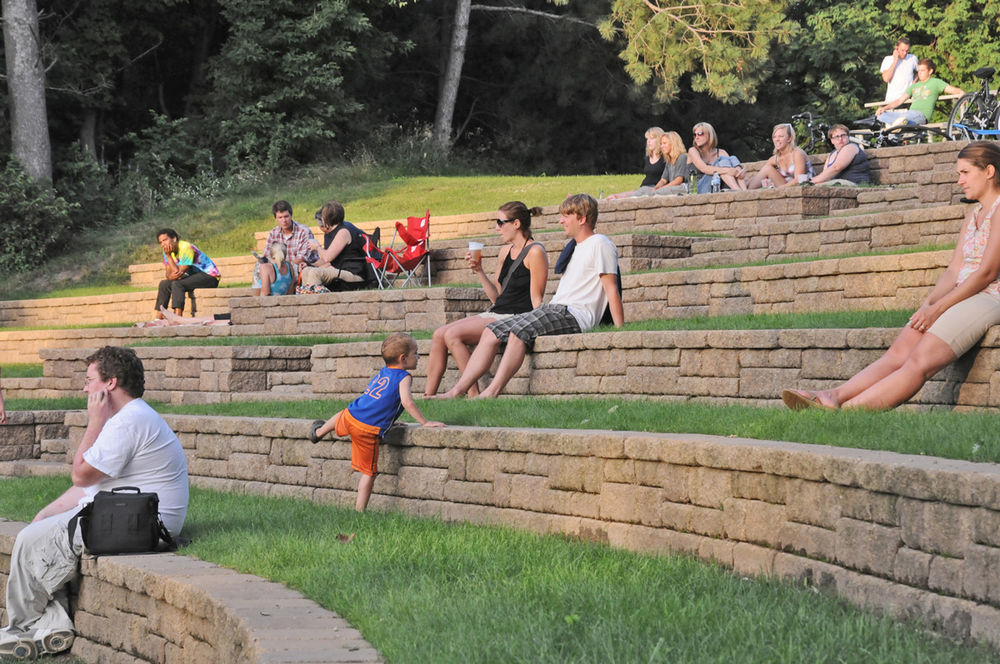 The Minnesota Orchestra performed at the dedication ceremony of the Melvin Wall Amphitheatre in 1972. Over the years, it has become a favorite gathering spot for UWRF students and area residents alike, hosting everything from commencement ceremonies to a popular weekly summer music series.

But the elements took their toll on the amphitheatre, according to Joe McIntosh, UWRF grounds supervisor.

“Over time, the limestone had kind of deteriorated, so we put in a proposal to have it redone,” McIntosh explains. “We looked at a couple of different types of natural stone and also the VERSA-LOK product. The natural stone was out of our budget range, so we went with the VERSA-LOK.”

The project began in Spring 2009 and was completed later that summer. The removal of the limestone blocks and installation of the new seat walls presented some challenges.

Two massive oak trees shade the center of the facility and had to be preserved.

“We took some protective measures and tried to keep the contractors away from them as much as we could,” says McIntosh. “Then we gave them some product to enhance their root system. So far they look pretty good.” 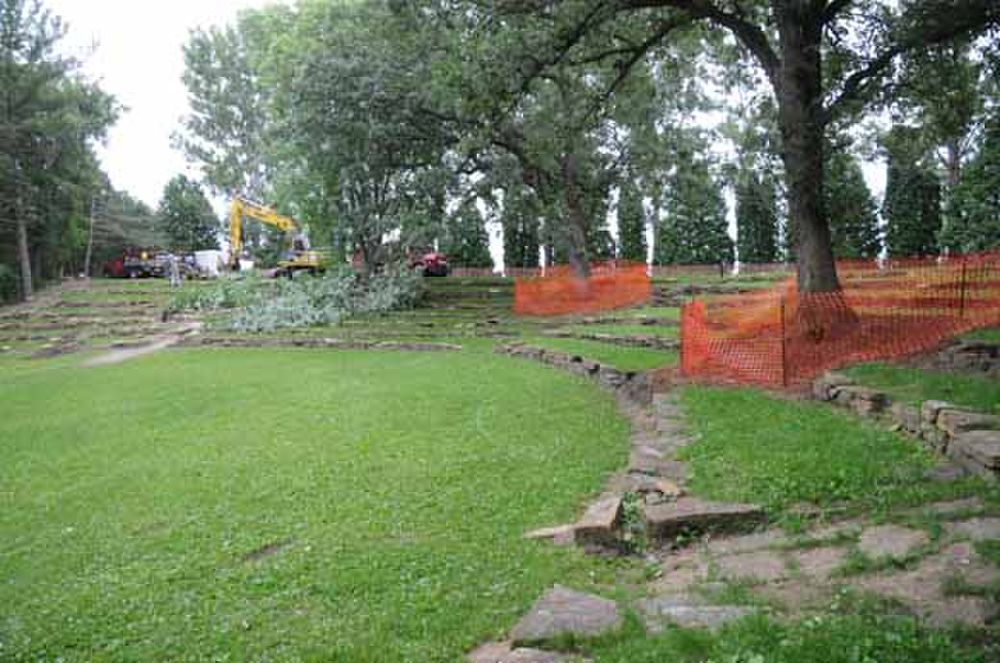 The gracefully arcing seat walls are over 1,400 feet long and about 1.5 feet tall. Stairs are integrated into the seating tiers at several points. Two firepits, also built with VERSA-LOK, were installed at the top of the amphitheatre. Over 3,000 square feet of VERSA-LOK were used on the project.

The old limestone was put back into service after it was removed from the amphitheatre’s seating, says McIntosh. 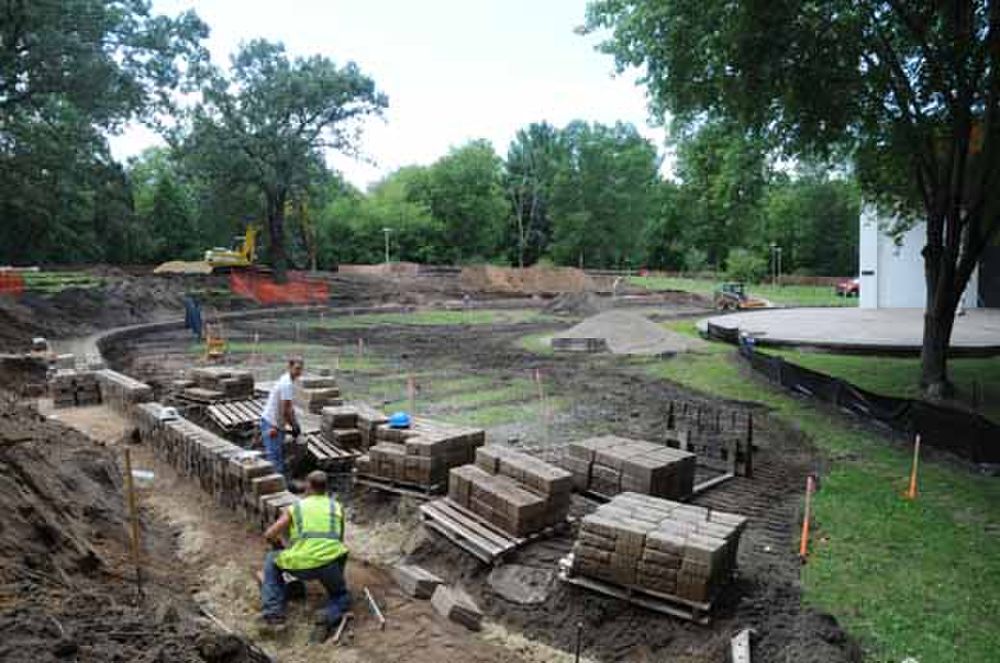 “We saved most of it and have it stored,” he says. “We’ve been using it fairly steadily the past couple of years on some small landscaping projects around campus.” Some of it was even returned to the amphitheatre and used in the stair landings.

The Melvin Wall Amphitheatre rehabilitation project was completed in Fall 2009 and landscaping was finished the following year. Total project cost was around $150,000. It remains the only outdoor amphitheatre on any Wisconsin college campus and one of the few in the country located on a campus. 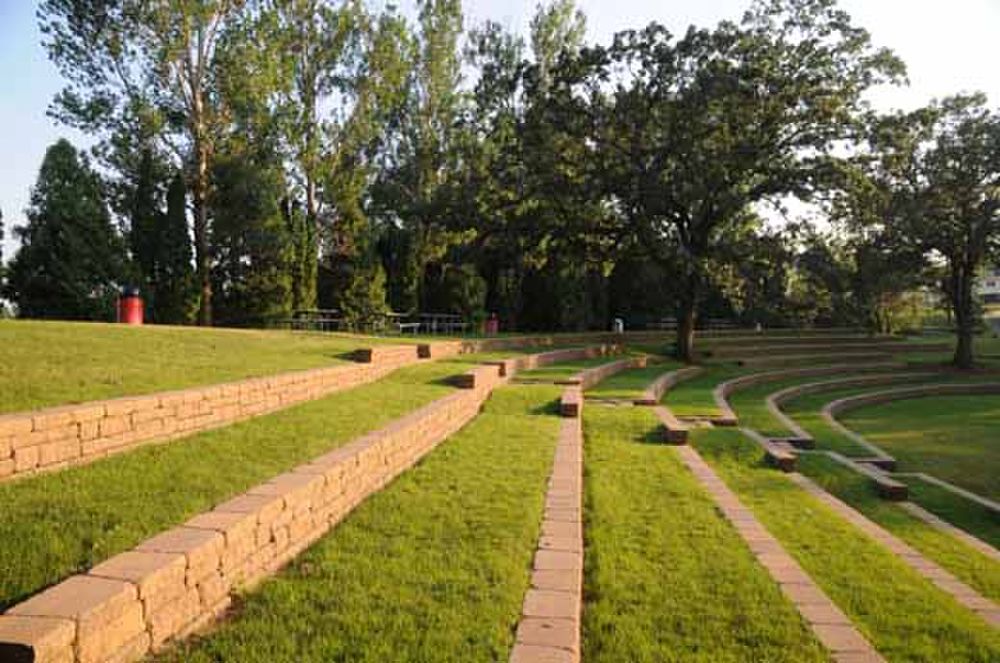