VERSA-LOK retaining walls have been called upon to solve a lot of erosion problems. But few have been so complex or unique as keeping a towering cliff from crumbling into Lake Erie outside of Cleveland. 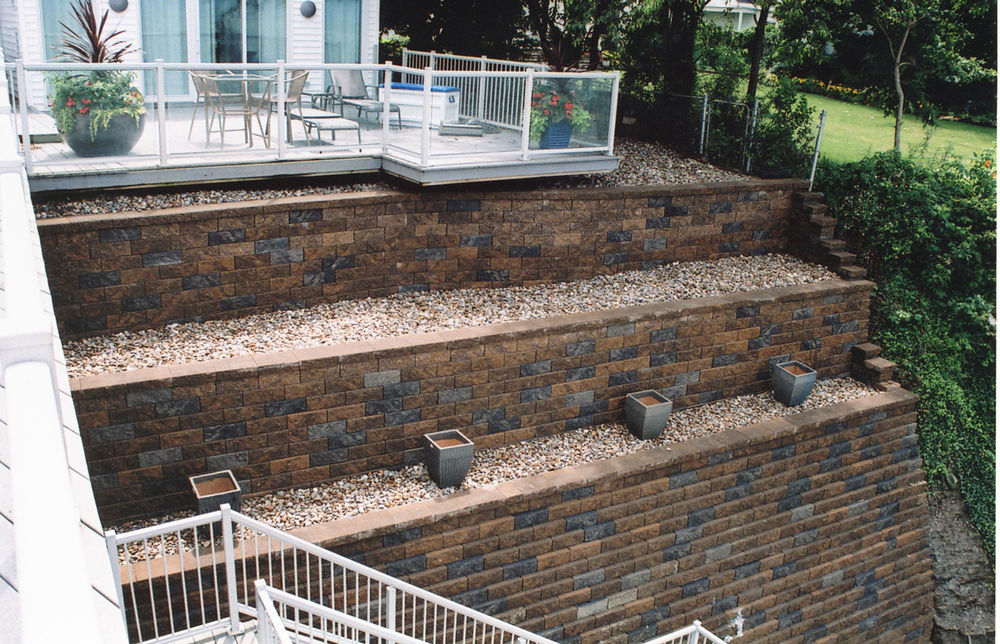 A home built about 20 feet back from the cliff face was endangered because the cliff face was eroding away and the homeowner was slowly losing his lakefront real estate. The top 8 to 10 feet of the cliff is pure topsoil, Greg Norton, owner of NCS Construction Services, explains. Beneath that is about 5 feet of solid clay, which turns to shale as you go deeper.

“The softer shale flakes off but it gets harder as you go deeper. The lake eats away at the base of the cliff, but it’s the groundwater at the top that does most of the destruction. First the soil, then the clay washes away and then large pieces of rock.”

The existing seawall was used as the footing. The concrete wall extends upward for 17 feet and an 18-inch cap on top rests on a ledge chiseled out of the cliff face. The VERSA-LOK wall rests on top of the cap.

Once the footing was completed, a series of three decks was built that jutted out from the cliff and was connected to a pier on the water by zig-zagging stairways. The retaining wall was built behind the deck/stairway structure.

The VERSA-LOK wall begins at about 13 feet above the water level. It’s 65 feet wide and 27 feet tall and was built in three tiers with a slight curve.

About 3,000 VERSA-LOK Standard units in a blended pattern of 80 percent brown and 20 percent gray were used. A special conveyer belt system was designed to lower the blocks down the cliff face one by one; a chute alongside the conveyer was used to transport the backfill aggregate.

“The higher we went with the wall, we had to adjust our system of transport,” says Andrassy. “We had a little innovation going on. Everyone got a good workout. No matter how good you are at moving it, that’s a lot of block.”

“With its flexible slot-and-hole pinning system, VERSA-LOK was perfect for the application,” says Norton. “It looks awesome.”